It's cold and it's Autumn and it's beautiful. Finally.

i can't imagine a better time to really settle down and do a cleanse of my mind and body. i am out of work which means i have a lot of time to myself and i have a lot of time to think and write and wrap my mind around the words of those i hold closest. perhaps, i will not over think everything this time and find a little piece of sanity as i venture through this. i'm thinking about doing a fourteen day detox, as was done in december. i will have even more time to myself because jaime is working (maybe even two jobs) right now. i just want to be at peace with everything.

Your Letter gave me more delight, than any thing in the world but yourself could do; indeed I am almost astonished that any absent one should have that luxurious power over my senses which I feel. Even when I am not thinking of you I receive your influence and a tenderer nature steeling upon me. All my thoughts, my unhappiest days and nights have I find not at all cured me of my love of Beauty, but made it so intense that I am miserable that you are not with me: or rather breathe in that dull sort of patience that cannot be called Life. I never knew before, what such a love as you have made me feel, was; I did not believe in it; my Fancy was affraid of it, lest it should burn me up.

this time next week i will be married and my name will have been changed everywhere important. about 7pm tomorrow and i will probably be on my way back to our town completely married and completely happy.

today is my last day to embrace all that i have been for the last twenty years. pack up what i want to keep with me all the things i still want to be and rid myself of the rest.

Sitting in a large circle with all the kids who you use to be friends with, who knew who you were before is strange. Strange when they all try to pass it to you, even after you politely decline; strange because no matter how long has passed these people will still love me and sit with me in the grass. Mostly Extravaganja was strange because why the hell had I never heard about this when all I did was get high every day?

Sunday Jaime and I spent the morning in the sun building fires and scaring me on the go cart at Lenny's house. We spent the evening with Corey and then doing our laundry. I don't know how serious Corey thinks we are about getting married, but we are. We're supposed to be going to apply for the license tonight but we'll see where the evening leads us. Anyways, they're going to be my family...it is strange to think about it like that, I feel like I could very well belong there and consider it home. These people are alive and full.

Yankees were swept this weekend...ugh.

as for my slight laps of the great depression, yeah, i was incredibly depressed for a while and it was because there was some pretty heavy stuff going on between our relationship. but that is done, we are happy, we are moving from it and everything is okay. the amount of happiness that we share with one another is monumental...honestly. i can't think about him without smiling or causing a tingle up and down my spine causing me to shiver. we are moving from the past, moving forward, we are better.

"If it's All One then it doesn't matter what direction you travel in.... - Buddha"
If there is no way out of the labyrinth then it shouldn't matter which course I take.

I just want to note that I didn't talk about it once. But I had a really good weekend with the people I spent time with. They made me laugh and smile and be generally happy even though Saturday (01/10/09) was the two year anniversary of Nick's Death. It doesn't feel like it's been two years...and yet it almost does feel like it has been two years. Life doesn't stop moving forward even when you almost need it to.

I miss him. I love him. I wish he were here more than anyone can comprehend. His brother's girlfriend contacted me on Facebook. It makes me feel good to know that I can appreciate Nick's life with people who also knew and understood how much of a beautiful person he was. It makes me wish I could go sit with him and talk to him, though I would bet that it's not plowed where he is. 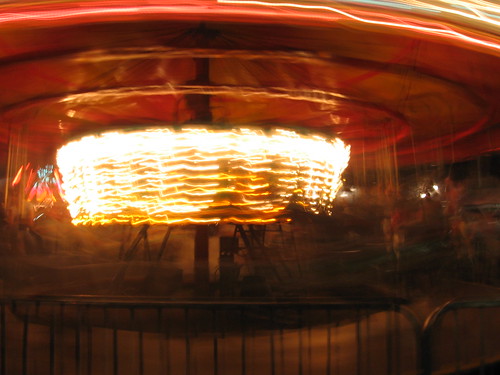 All the parents and mothers and everybody went over and stood right under the roof of the carousel, so they wouldn't get soaked to the skin or anything, but I stuck around on the bench for quite a while. I got pretty soaking wet, especially my neck and my pants. My hunting hat really gave me quite a lot of protection, in a way, but I got soaked anyway. I didn't care, though. I felt so damn happy all of a sudden, the way old Phoebe kept going around and around, I was damn near bawling, I felt so damn happy, if you want to know the truth. I don't know why. It was just that she looked so damn nice, the way she kept going around and around, in her blue coat and all. God, I wish you could've been there.
Collapse