I feel better the last few days, more grounded to earth if you will. Picture this: I am doing something I've always romanticized doing but never really did before. I'm sitting in Panera eating my cheddar broccoli soup with ear phones and using my lap top in the corner of the cafe (Panera is sort of a cafe/bakery right?) But I'm loving it. When I see people in places like this I always wonder what they are doing on their computers, the sites they're viewing, if they're writing or doing something for a class they just had or will have later in the week. Sometimes I try to imagine what it would be like to be friends with some of these people.

I went out today to pick up my new camera. Best Buy fixed the lens error I was having with my 110SX - but when I picked it up there was a crack in the screen that had not been there previous to me dropping it off. They said they were unable to fix it so they would just give me a new camera, which to my luck was upgraded to a 120SX because they no longer carried the 110SX, I'm super excited.

Also, this holds no merit to anything and I am not sure why I am going to mention it...maybe because it has been such a long time since I've gone out anywhere and been hit on by someone. But when I was walking into Best Buy today these two guys drove up next to me and started to hit on me. Like Nick use to say to me, it's always nice to hear that you look cute. It's been a while since someone told me I was attractive.

Speaking of Nick, I need to bring him a long letter and some flowers soon. I miss him and I've been thinking a lot about him lately.

It's my night to choose what we're having for dinner. I want some sort of pasta with white sauce which means I will be making two dishes because Jaime doesn't like white sauce. So I'll do something simple for him and Corey which will leave left overs for them to take for lunch to work. I hate when it's my night for dinner because I can't get away with having a low calorie soup or something like that. The boys do not really eat healthy at all and we eat later in the night which completely sucks when I don't really like eating after 7:30p. 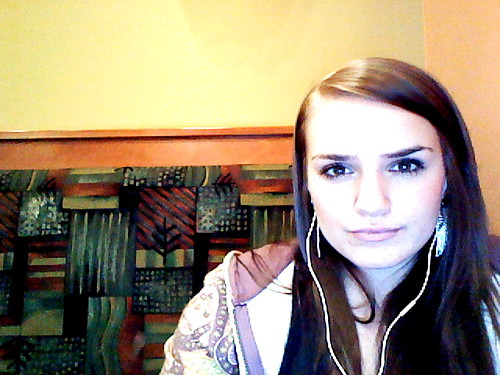 summer is over, i can tell because it's cold at night now and my finger nails get blue a lot lately. i wasn't prepared for autumn, fall if you will, to be back so soon. i think i still loved joshua at this time last year...which is foreign to me now.

in the last two days i have had more to eat than i have all week. i suppose this is due to "family dinners" both nights. either way it has left me feeling bloated and discouraged. i want to find that little kick of motivation that i currently lack.

it kills me that you can sleep fine without me, where i feel more empty than ever. i guess what has been bothering me lately is having to deal with the ghosts you brought. i have even found them in my sleep, those cruel laughs; their harsh realities have found me in the one place i can usually find peace. all the ruins that surround me leave a burnt taste in my mouth, i swear i taste it. this is not what i hoped for, this is not the type of poetry i saw myself writing on these cold nights.

Jaime is stressed out lately and has a hard time not lashing out when he is, me being on the other end. I can't help but feel like I do something to prevoke it, though he says it's not me and apologizes for his bad moods. I miss when we were happier. But I guess it is rather frustrating to go from having everything all completely set with our future back down to having nothing figured out. I hope our love will carry us through these dark days.

I bought apples and lots of diet soda and large bottles of water to keep my days simpler. I need to stop making excuses and producing results.

I have a weight loss goal of 12lbs for now.

I officially have my own phone away from my cousin, meaning all ties are completely severed which is perfect. Jaime added me to his family plan, he keeps making jokes about how if I'm bad he'll take my phone away from me.

In other news I am doing good today. Toast for breakfast and then I thought I might be feeling hungry but thinking it's too soon to have anything yet I optioned for a diet coke instead and I do feel much better about that choice. Tomorrow I get paid and then I get to give Sarah money for the fence, pay my credit card bill or car insurance which ever is due first and hopefully I'll have some extra cash so I can do something nice for jaime's birthday this weekend. I have never been as strapped for cash as I am these days. I need a job, I wish someone would call me back.

i can't imagine a better time to really settle down and do a cleanse of my mind and body. i am out of work which means i have a lot of time to myself and i have a lot of time to think and write and wrap my mind around the words of those i hold closest. perhaps, i will not over think everything this time and find a little piece of sanity as i venture through this. i'm thinking about doing a fourteen day detox, as was done in december. i will have even more time to myself because jaime is working (maybe even two jobs) right now. i just want to be at peace with everything.

i get to walk sadie every day now, which is awesome - not only does she like to run over walk. but it makes it less lonely.. running by myself is lonely. my existence is half lonely these days.

i am hoping august will be better. that i will find a job and that i will be less than i am now.

you are needed extremely. by the end of the month i don't want the pants you're wearing right now to fit you. it needs to happen, it should have happened a month ago. months ago. look, katey, you are fat, everyone can see how large you are so there shouldn't be any shame in saying out loud that you need to go on a diet. perhaps then you would actually get off your ass and do something about it. ugh.

august has a goal weight.

20 things to be thankful for:

01. having nearly all my belongings packed & ready to move.
02. jaime is making his way across country to come home to me.
03. being able to help corey out as much as i can without expecting anything in return.
04. shanna for spending the last three weeks with me so i wasn't so alone.
05. finding someone that is greater than my search for alaska.
06. having bought a warranty on my camera because i'm having lens issues.
07. not being pregnant right now.
08. removing negative people from my life.
09. someone who loves me even though i can't stand the way i look.
10. snapple facts and delicious iced teas.
11. jaime having a job somewhere other than tire warehouse.
12. trying to be more of an optimist.
13. jaime forcing me to go back to sleep this morning after another night with only 4 hours of sleep.
14. summer garden fresh vegetables.
15. someone to sit on the roof of my car and star gaze with this summer.
16. iced coffee from d&d with xcream & xsugar.
17. finding more boxes than i needed to move all my stuff.
18. my cell phone bill dropping from over $90 to $60.69.
19. the time traveler's wife coming out soon & jaime taking me to see harry potter.
20. being more active.

today i wasn't as lucky to hear from jaime - however, shanna and i took a nice two hour walk and it's been smooth sailing as far as the fast is concerned. today is day one of ten and probably the only day i'm going to allow myself to have coffee as my body reacts terribly to the caffeine when i have not had anything solid to eat in a while.

everything is looking good, going good and i'm pretty lovely as far as my moods have been in the last few days. :]
Collapse